“It’s even better than I thought!” enthused Harriet Swale after her trial instruction flight in February this year.

Her instructor, Ben Jackson was so impressed with Harriet’s skill at piloting the C152 that he proposed her for an Air Services Australia scholarship.

Two scholarships, worth $7,000 each, are available annually and are administered by the Royal Federationof Aero Clubs of Australia.

Harriet is a Qantas flight attendant and is currently completing a commerce degree at Curtin University. She undertook a trial flight to see if her dream of becoming a pilot could become reality. She summed up instructor Ben Jackson in one word – “GREAT”.

John Douglas gave a delighted Harriet the news that she had won a scholarship . After the first few training flights, Harriet has been bitten by the aviation bug and now wants to sit in the front of an airliner as a pilot, instead of being a flight attendant. Instructor Ben Jackson declared that “Harriet is a true natural – possessing a passion for flying makes training so much easier”.

We wish Harriet all the best in her training and look forward to the achiever’s bell ringing. 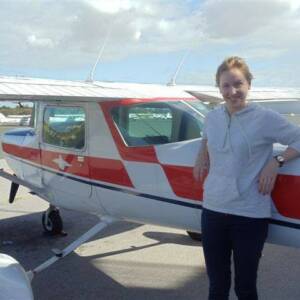