It seems extraordinarily common that a long-planned flying day begins with cloud. So it was on the morning of 4th May when pilots and passengers were ready to start the Stirlings Air Race and Fly-In while a weak cold front passed over Jandakot with a cloud base not much greater than 1000’ and the top of the Scarp obscured.

The plan had been to have a full Saturday of flying. This would have started with a two hour navigation race from Jandakot to Wagin, then a stop at Wagin for lunch as guests of the local Aero Club and take in the smell of jet fuel at a meeting of the WestJet model aircraft club, and finally a time trial from Wagin to a farm airstrip adjacent to the Stirling Range Retreat, close to the foot of Bluff Knoll in the Stirling Ranges.

Not to be deterred by a bit of cloud, we exercise sound judgement to make a later start, and reduced the competition to a time trial from Jandakot to Stirling Range Retreat.

For the uninitiated, the time trial event involves the team for each aircraft nominating an expected flight time for the trip (commencement of take-off roll to arrival overhead) and scoring points for minimising the difference between nominated and actual flight times. A forecast of strong, variable tail winds and the possibility of diversions to avoid rain showers would add to the challenge of this time trial.

Nominated times for 176 nm distance ranged from 60 minutes for Baron VH-OVP to 88 minutes for Cessna 172 VH-KTV and RACWA’s Sling2 VH-RWV.

Nine aircraft with ten engines amongst them finally departed late morning from Jandakot, Northam and Serpentine.

North westerly tail winds were indeed strong and variable, ranging from about 25 knots at 2500’ to 50 knots at 7,500’. It was pleasing to see 210 knots ground speed on the display of the RV14 I was flying as I raced ahead to time the arriving aircraft. Unfortunately I neglected to take a photo of the screen although I did go through the mental exercise of working out that this gave me a fuel economy of 33 miles per gallon, which is a whole lot better that I achieve in my car. I filed this number away for responding to future accusations about the environmental friendliness of my aviation hobby.

The airfield at the Stirling Range Retreat presented some fun. First there was the challenge for some of finding the airfield, cunningly disguised as a paddock and identifiable only by lines of car tyres, once painted white buthighly weathered. Some crews found it, then lost it flying the circuit!

Once the airfield was located, pilots had a “choose your own adventure” for the landing: 1000m of runway with a 15 knot cross wind, or a 600m cross-strip with 40’ trees just before the threshold. The selections were ultimately evenly divided and each seemed to work just fine, although we were watching with some interest as Cirrus SR22 VH-SXR finally got its wheels on the ground in the last few hundred metres of the short runway.

The time trial was a close run thing with several teams within a minute of nominated time: the prize being taken by team VH-SPN (Andrew Eldridge, Mark Dawson and Cairenn Dawson) with a time difference of five seconds from a nominated time of 70 minutes. A commendable result given the stories they subsequently told of first being behind time and climbing to catch stronger tail winds, only to then find themselves so far ahead of time that there was a period of wheels and flaps down.

The remainder of the afternoon was whiled away with aviation talk over lunch and coffee at the Bluff Knoll Café, before a slight shift to more aviation talk over beer and wine at the function centre of the Stirling Range Resort. The big attraction here was one of the local sheep flock that was slowly roasting over a fire fuelled by well-aged fence posts.

The Borden Primary School Parents & Citizens had kindly offered to cater as a fund raiser and are obviously well-practised masters of the spit roast: including we understand manufacturing the rotisserie two days earlier from bits of machinery found at the back of the shed. We were treated to a three course meal of hearty soups, lots of roast lamb and multiple desserts.
An absolutely awesome feed and great conversation with some of the local farmers.

After a very comfortable night’s sleep in the cabins and chalets of the Stirling Range Resort, there was a choice of activity on Sunday morning. Seven of the group opted for a walk up Bluff Knoll in perfect conditions to experience the mountain. A bit of cloud and mist, giving way to spectacular views at the top and the spectacle of strong vertical winds blowing straight up the cliff face: nobody tried a body surf, but it looked strong enough. Can certainly see why the glider pilots make their pilgrimages to this part of the world.

The remainder of us revisited the Bluff Knoll Café for a buffet breakfast and then headed to the aircraft to take several of the locals on scenic flights around the ranges. There were some wide smiles amongst some very satisfied “Iwant-to-be-a-pilot” children.

The fleet then took to the air for a short hop over the Porongurups to a get-together and lunch with the Albany Aero Club.

Unfortunately time with our Albany brethren was cut short by the need for a prompt departure to tackle 25 to 35 knot headwinds back home and allow sufficient flight time for the prospect of rain and diversions. A good bit of log book time built up on this leg: 2:30 at C172 speed, and a steady yoke hand required to stay as much as possible out of the wind at 2500’ in light to moderate turbulence.

Ultimately all aircraft made it back home safely, the only casualty being one aircraft electrical system that knocked off early resulting in one radio-less arrival at Jandakot (and flapless and trimless and without engine and fuel gauges – makes one hanker after those old analogue instruments and manual controls!). The tip here is, whatever else the standard procedures for radio failure, have the Jandakot Tower phone number already programmed into your mobile and just give them a call if you have a problem. The tower staff were very helpful.

All in all, a highly successful outing. Great camaraderie, beautiful location, fantastic country hospitality and the opportunity to
share our passion for aviation. Some pilots were taken a little out of the comfort zone, but well within acceptable margins of safety and came home with greater skills than they set out with. Everything we could possibly want in a flying event.

The Club greatly appreciates the assistance provided in holding this event from Marcus Souness and the Paper Collar Grazing Company for allowing use of the airstrip, the Stirling Range Resort, the Borden Primary School P&C and the Albany and Wagin Aero Clubs. 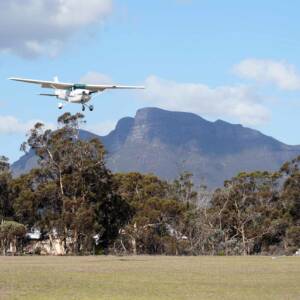