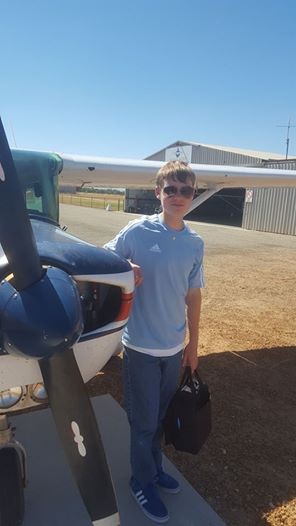 The youngest pilot in Australia is Glen Sparks after he successfully completed his first solo flight on 1st February. The record will be very hard to eclipse. Born late in the evening in Dundee which is eight hours behind Perth time, Glen had technically not reached his 15th birthday by the time he undertook his first solo flight.

Royal Aero Club of WA flight instructor John Crisp praised Glen’s dedication to fulfilling his dream of conducting his first solo flight on his 15th birthday. “Glen has always made sure that he was well prepared for each lesson which ensures that his training is a lot of fun”, he said.

Glen was supposed to be back at school this week attending classes at Mandurah Baptist College. However, his parents agreed that he could miss the first day of school to allow him to achieve his dream.

Supported by the Club’s Young Eagles Aviation Program and Australian Airforce Cadets, Glen is passionate about learning to fly. In 2014, the minimum age for students to fly solo was reduced to 15 years and this was the trigger for Glen to set his goal of flying solo on his 15th birthday.

After his flight, an elated Glen stated “It is an unbelievable feeling flying solo. I didn’t grasp the impact of it until I was up in the air and turned to where my instructor was supposed to be that realised I was, in fact, flying the aircraft completely alone.” Glen’s advice for other budding pilot’s, “Go for it, focus on building flying hours, train hard and complete your study. It is extremely rewarding and fun.”

Glen’s next goal is to progress to flying solo away from Murrayfield Airport. His ultimate dream is to obtain his commercial pilots’ licence and fly for an airline.

Glen’s mother Sonya was extremely proud of her son’s dedication “Since he was little he was adamant that he was going to learn how to fly and that determination has never waived.” 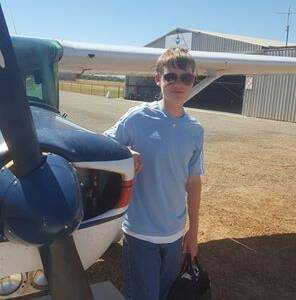 The Youngest Pilot in Australia is Glen Sparks