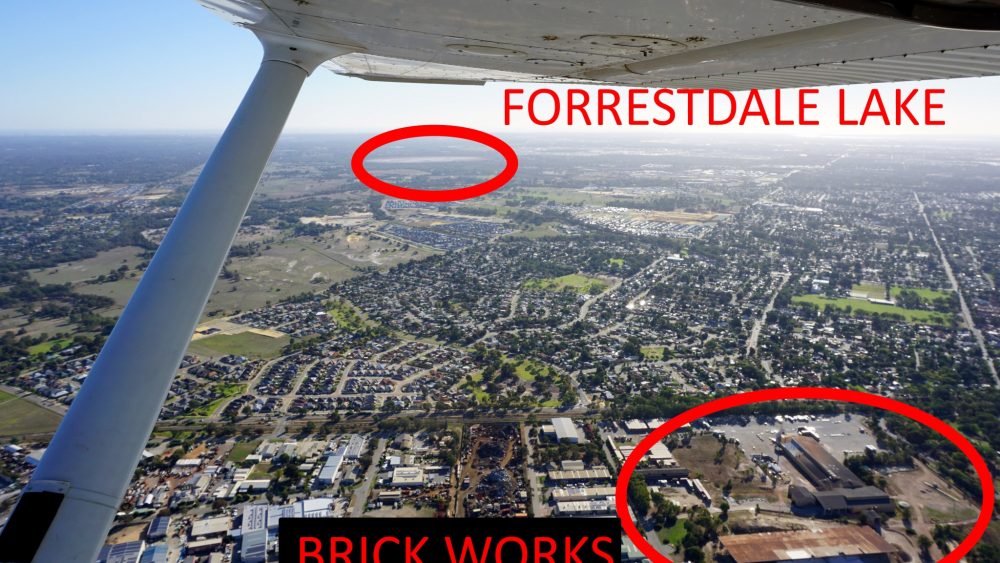 Thursday 23rd of May 2019, mark it down as there are big changes at Jandakot! Firstly you will notice the inbound position of six south has been abolished (and probably for good reason considering when you see where some people report from!) It has now been replaced with two individual inbound points; “BRICK WORKS” and “OAKFORD”, these will both merge on to the singular point of Forrestdale Lake just like arrivals from the West (Powerhouse and Boatyard) merge at Adventure World.

1nm to the south of the Armadale outbound point is Austral Bricks yard, this is the point known as Brick Works. Due to its close proximity with Armadale, pilots are advised to familiarise themselves with the location before using it as aircraft will be at similar altitude outbound just to the north.

Oakford is very close to where pilots may have called six south prior under the old arrivals plan. Oakford is defined as the intersection between Nicholson Road and Thomas Road and is located approximately 2.5nm to the south of the western edge of Forrestdale Lake where pilots should be making their next call.

Another upcoming change is the ATIS frequency. Some of you may have noticed in the past a bleed through could occur of the ATIS on 119.4. Airservices had tried numerous fixes for this but sadly none have worked so the last resort is a change of the frequency. ATIS and after hours AWIS will now be broadcast over VHF on 128.65, 281 will remain the NDB frequency.

If you need any more info on any of the changes for the aerodrome as well as the current works in progress for the runway and lighting upgrades please don’t hesitate to talk to one of our friendly instructor team when you’re in next or alternatively give them a call on 9417 0000. By Jarod Rowe, RACWA Flight Examiner, Deputy Head of Operations/Flying Operations, CFI VFR.

An added consideration to the new inbound points which become effective on 23 May is the proximity of the Brick Works (BRIC) to Armadale (ARE). Reference your VTC and ERSA to assist with the following.

The new inbound points have been detailed by the CFI of the VFR department, and this is not an article to replace that. This is about the ARE departure itself. If conducted correctly it will minimise the consideration of outbound traffic conflicting with inbound traffic at BRIC. Although there is a lot of concern that the two points are too close to each other, you should be aware that traffic inbound to YPJT from the MUE/CDM direction have been doing just what the new procedure is recommending for years. The new procedure simply makes this practice formal.

The one issue we do have is the fact that a lot of pilots struggle with the correct ARE departure. I have seen many pilots depart to
the North-east, tracking towards Gosnells or Kelmscott, or tracking to the South-east, crossing Armadale Road and flying over the
brickworks south of Armadale (yes, the new BRIC inbound point). The argument that the BRIC is too close to ARE is not as valid as the argument that a lot of pilots don’t know where the ARE tracking point is, or how to get there from YPJT.

When departing via ARE from runway 06R/24L the correct procedure is to depart from the end of crosswind at 1000’.

When departing from Runway 12 climb upwind to 500’ then make a slight track correction to the left (approx. 10 degrees) continuing the climb to 1000’. Departing from Runway 30 you should make a RIGHT circuit (as published in ERSA) and track to ARE from the end of the right downwind position. Remain clear of the Perth CTR and final for Runway 30.

Be mindful that the track on the VTC from YPJT to ARE will not take you to the tracking point. The reason for this is that the track
is from the Aerodrome reference point (ARP). If you are correctly departing to ARE you will not be on this track because you are not tracking from the ARP. The ARE departure is a visual departure, just the same as YGB and FREM.

Whichever runway is in use, upon leaving the YPJT CTR commence a climb, remaining outside the vertical limits of the Perth CTR, continuing your track to ARE. The best visual way to ascertain you have left the JT CTR is that if you have crossed the Tonkin Highway you are safe to commence the climb. Don’t forget to change frequency from JT TWR to PH CEN, and the transponder from 3000 to 1200 at this point. Prioritisation should be given to the climb, radio frequency then transponder code, in that order. If you are departing via ARE for a clearance in to the PH CTR you should squawk your discrete transponder code as soon as you receive it on the ground at YPJT (SBY on the ground, ALT entering the runway). You may request traffic as you are
approaching ARE, this is at the pilot’s discretion. Use your discretion wisely. If you hear PH CTR give traffic information to another pilot in your vicinity, do you really need to use up valuable transmission time to request traffic that you just heard being given to another pilot?

Under all circumstances you should remain clear of the Perth CTR and FDL. Remember, if you cross Armadale Road prior to reaching ARE you will more than likely be tracking toward BRIC. The ARE departure should be a simple VFR departure. Most pilots depart via YGB without the use of a map as it is a visual departure. For some reason ARE appears to give some pilots
much more difficulty. Familiarise yourself with the above procedures (taken directly from ERSA) and above all else familiarise yourself with where the ARE tracking point actually is and you will minimise the possibility of conflict with inbound traffic or a VCA.

Once again, the BRIC position has been used by pilots as an unofficial inbound point for years (the mythical “Six Southeast”). The new procedure is no more, or less safe than has always been the case, although it will prevent pilots inbound from the East tracking to SIXS – replaced by Oakford (OAKF) – perpendicular to inbound traffic from the South which may be tracking to the OAKF inbound point.

The big consideration is that we actually departing via the correct position at ARE. 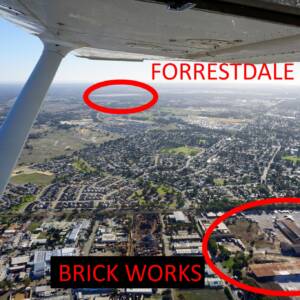 Inbound position of six south has been abolished