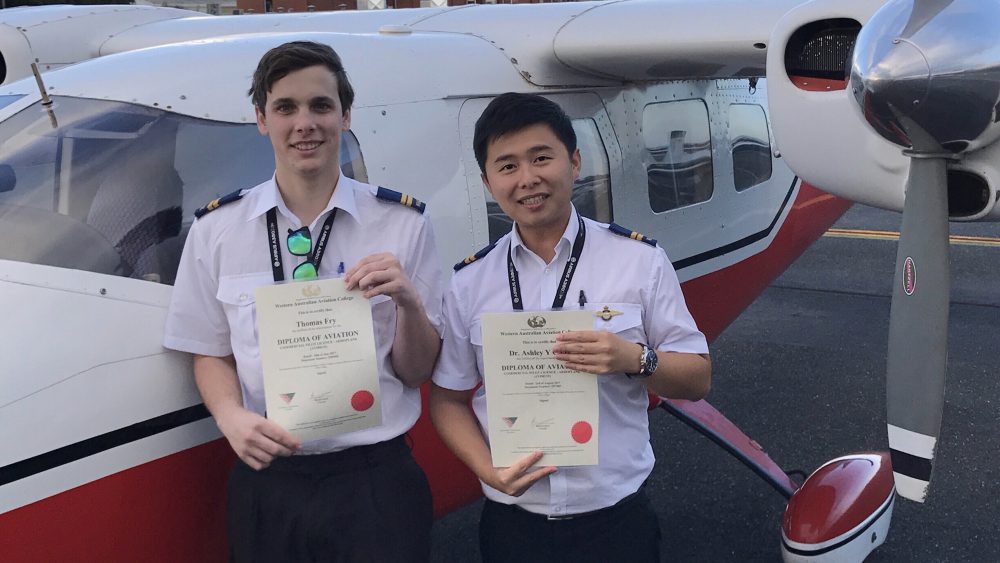 The WA Aviation College (WAAC) was recently accredited to offer the prestigious Diploma of Aviation (Aeroplane) qualification. The Diploma is a nationally recognised qualification issued by Registered Training Organisations and incorporates the CASA commercial pilot licence (CPL). The Diploma replaces the Certificate IV in Aviation which was previously offered by the College.

College graduates can upgrade their Certificate IV in Aviation by completing additional studies. Due to the high training standards of both the College and the Club, the upgrade is not onerous as it covers work already incorporated into the Cert IV. Anyone interested in the upgrade can register their interest with Charlee Hateley at info@waaviationcollege.com.au

Tom Fry and Ashley Lee are the proud recipients of the first two Diplomas of Aviation (Aeroplane) issued by the College. Both Tom and Ashley completed the CPL phase of their training in the Partenavia, as they felt that a multi engine rating would help advance their career prospects.

Tom was bitten by the aviation bug from an early stage, and would fly from Karratha to Perth every month for a weekend of flying training. “I used to work as much as possible in “Maccas” to First Diploma Recipients fund my flying. My Mum helped make up the shortfall,” he said. After leaving school, he joined the College to obtain his CPL and Diploma. Tom is looking for a charter position before moving to the airlines.

Ashley is a doctor who decided that being a pilot was preferable to medicine. After completing his doctorate in Edinburgh, he returned to Malaysia where he came to the conclusion that he wanted to become a pilot. “My parents weren’t happy”, he admitted, “but it was something that I knew I wanted to do. WAAC became my Perth family, I have thoroughly enjoyed the camaraderie that evolves within the class.” Ashley is enrolled on the next instructor course. When asked about giving advice to anyone considering becoming a pilot, Tom and Ashley unanimously recommended an aviation career. “You must be willing to put in a lot of hard work”, Tom said, “there is a lot more commitment required”. Ashley recommended students take advantage of the opportunity to undertake away trips for their solo consolidation phase of training. “You learn so much more on an away trip, it really helps your confidence.”

Congratulations on being the recipients of diplomas 0001 and 0002! 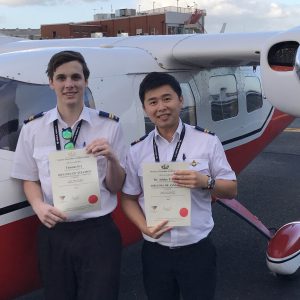