AT 96, Arthur Cornwell thought his flying days were over.

The British Royal Air Force (RAF) veteran had not flown in a plane since an impromptu trip to Rottnest almost 30 years ago, but yesterday he got to relive his youth once more.

Staff at Southern Cross Care in Shelley, where Mr Cornwell resides, got in touch with the Royal Aero Club in Jandakot, who organised a 30-minute flight in a Tiger Moth plane piloted by one of their members.

Mr Cornwell enrolled in the RAF as a fresh-faced 17-year-old in 1940 during the midst of World War II and served initially as a key part of Britain’s offensive against the Germans in their bomber command unit. 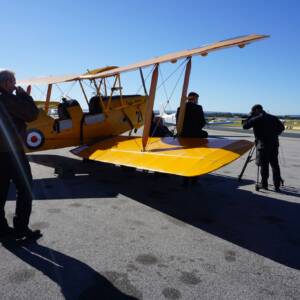