“An event such as our 90th Anniversary celebration reinforces the benefits of being a member of a great club such as the Royal Aero Club of WA. The opportunity to participate in our many social events, both flying and non-flying, distinguishes us from a simple flying training academy.” Andrew Eldridge, Club President.

Hello Members, happy 90th birthday to you all! It would have been nearly impossible to have missed the fact that 22nd August 2019 was the 90th anniversary of the Club. My thanks to our Marketing Manager, Jodie Atkinson, for her wonderful efforts promoting and staging the celebrations at the Club, and to all the staff and members who contributed to making the celebration a great success.

On Thursday 22nd we planned a 15-ship formation to overfly the Club in the shape of 90. Unfortunately the weather was not at all conducive to formation flying, with strong winds and blowing sand, and with some hurried rearranging of aircraft bookings, it was postponed to Saturday. Nevertheless, we went ahead with a Sundowner on the date of the anniversary to celebrate the occasion.

Thankfully the weather on Saturday was beautiful for all the activities planned for that day. Our goal was to have 90 members or past members take a flight from the Club. Those who were current were invited to take a flight of their own on any route of their choosing. I was privileged to be part of a small formation carrying a group of distinguished members for a scenic flight over the city. Our formation consisted of the Club Partenavias, VH-IXE and VH-PNT and we were joined by Adrian Thomas and Bill Thomas in Harvard VHWWA.

For those not able or wanting to fly as PIC, we made all the instructors and aircraft available for dual flights, with the option of a scenic flight in a four-seater, or a commemorative flight in a C152.. Many members chose the option to fly a single circuit in a C152 to remember their many joyful hours of circuits as a student. Jandakot Tower were very accommodating and for that
we are very grateful.

Overall we achieved our goal with 93 flights and 124 members airborne on the day. Well done to all those who participated, and to the staff in Operations for coordinating everything, and of course, to the instructors who sat in the right seat when they were needed. Everyone who participated received a special Diamond Flight pin and a signed photographic certificate from the Club to recognise their participation. Thank you also to Frank Cocks for bring his pristine 1929 Model A Ford to the Club so we could appreciate just how old we really were.

At the end of the day, as the sun was getting low on the horizon, the 90 formation overflew the clubhouse. It’s a huge logistical challenge to safely and successfully create a formation of 15 aircraft, and I would like to thank all the pilots, and particularly Werner Buhlmann for his assistance with the training of the team. Reports from those on the ground suggest it was a spectacular display. From my position in the air, it was very impressive, and a great thrill to be part of it.

Shortly after the formation, Bill Waterton gave us an exhilarating aerobatics display in his Extra. We are very grateful to Bill, and to ATC for facilitating this rare event at Jandakot.

On Saturday evening, we were treated to a wonderful smörgåsbord of exotic canapés and finger food courtesy of our friends Shazza and Raif at Muzz Buzz. My thanks to the staff and members who assisted with the bar and the running of the function on Saturday night. The event was attended by approximately 130 members and guests, with a number of members travelling from interstate to attend. This shows the remarkable level of dedication of our members. We kept formalities to a minimum, but we enjoyed John Douglas’s reminiscences very much. Thank you all for attending.

An event such as our 90th Anniversary celebration reinforces the benefits of being a member of a great club such as the Royal Aero Club of WA. The opportunity to participate in our many social events, both flying and nonflying, distinguishes us from a simple flying training academy. It is really important that we give our members a chance to engage with the Club, and we already provide many opportunities for you to become involved, and to stay involved, with the Club. In this day and age where we all seem to have half a dozen different leisure past-times, the day of the monomaniacal pilot seems to have passed. Compliance gets harder and harder each year thanks to CASA, and the cost continues to rise. It takes great dedication to remain an active pilot, and some simply find it too hard. To encourage our older members to keep flying a year or two longer, we are creating a new class of membership for “Senior” members – those who have been with the Club for 30 years or more, or have reached their 60th birthday. Additionally, to place the appropriate importance on engaging with members, we have asked our Club Captain Mick Harcourt, to head up a member engagement program, and I wish Mick every success in this venture. If you haven’t flown for some time, we’ll come knocking to ask why, and to give you all the assistance we can, to get you back at the Club and into the air.
We have received plenty of positive feedback about the 90th Anniversary lapel pins that were sent to all members. I’m very glad that they were so well-received.

“Our 90 Year Anniversary Celebrations took a lot of people, preparing a lot of weeks in advance, to make this day the success that it was, forgive me if I’ve forgotten anyone.” Jodie Atkinson, RACWA Marketing Manager.

* Thanks to David Currey & David O’Brien for helping nut out the different types of flights we were going to offer on the day, with David O’Brien spending the last 2 weeks before he went on leave sorting out the flight types, to make bookings with aircraft & Instructors, for Tobi Rodgers to call the Diamond Flyers to lock in. Thanks also to David O’Brien for bringing his family down to the event during his leave, to make sure all our sound and circuits were working as we needed them too!
* Thanks to Marina Manuel who organised her friend Candice to make the cake & pick it up. She also worked out how to pre capture dockets to make processing flights go smoothly on the day, and worked as cashier all day to free up Tina Li to help Tobi Rodgers at the Operations Counter.
* Thanks to Tobi Rodgers & Tina Li, who had no time for a lunch break, to handle enquiries/ bookings.
* Silvester Wong did a magnificent job photographing all our Diamond Flyers for their certificate and taking other event photos, in
absolute freezing conditions on the tarmac.
* Ebony Tindall, worked all day, pumping out certificates in time for the Diamond Flyers to pick up on return from their flights.
* Thanks to Thomas Keamy & Louise Langford who manned in tandem the photocopier to get the certificates into the frames & distributed with the correctly numbered pin on the Diamond Flyers return.
* Thanks to Coril Bere who helped Mel Lawrence with the floral table centre pieces, helped with meet & greet on the day & along with Candice Cai & Club Member Merlene Smith helped find the perfect way to precut the second cake without making a mess, for easy distribution.
* Thanks to Merrilee Greenaway who helped with meet & greet on the day & assisted to smooth over any glitches in Operations with Diamond Flight bookings.
* Thanks to David Schneiker & Michael Chlopek for being in early, asking about what they could do and how they could help brief other Instructors with logistics. Thank you also to all the other Instructors & Pilots who flew Members on the day.
* Thanks to Mike Yeates for bringing his Murrayfield students to Jandakot for the day to join in the fun.
* Thanks to Andrew Eldridge & Marco Surace for flying the Partenavia’s for those senior members who would battle to get into the
smaller Cessna’s, but who still wanted to participate in the festivities.
* Thanks to Jarod Rowe for overseeing the logistics on the day between Ops and Instructors, and sorting out the issues after we had an aircraft became unserviceable and when another aircraft ran off the runway.
* Thanks to Glen Caple who was coming in on the day in case we had any tyres blow, but, as already mentioned, he was soon replacing ZDR’s alternator, and returned the aircraft to service in a matter of hours.
* Thanks to David Royans who came in while still on leave, who helped fly Diamond Flyers & helped with meet & greet.
* Thanks to Gary Evans, Werner Buhlmann & Andrew Eldridge for taking ownership of the 90 Formation Flight & worked & practised for weeks to make it look as impressive as it did on the day. Thanks too, to those who flew in the formation; Tim Berryman, David Currey, Michael Chlopek, Martin Graville, Jim di Menna, Mike Watts, Bruce Rathbone, Liz Garcia, Andrew Eldridge, Mitchell Wells, Marco Surace, Iain Currill, Jeff Stein & Gary Evans.
* Thanks to Bill Waterton for the awesome aerobatics display, complete with smoke trail.
* Thanks to Frank Cocks OAM for bringing in his 1929 Model A Ford for display.
* Thanks to Brian Hernan for putting together a 90 Year Club History Presentation for playing in the members Lounge.
* Thanks to John Douglas for contacting old friends/members and flying them personally and to giving such a lovely speech at the commencement of the evening festivities.
* Thanks to Andrew Eldridge & David Currey who presented 25 & 50 year Membership pins and for also giving short speeches.
* Thanks to Mick Harcourt who came to help with meet & greet, who opened the bar at 4PM, although deathly ill, and stayed as long as he could before succumbing and handing the running of the bar over to Russell Philip.
* Thanks to Chazza & Raif Youssef & the Muzz Buzz Team for the AMAZING selection of food and for helping set up the balloons!
* BIGGEST THANK YOU OF ALL to all our present & past MEMBERS & FRIENDS who joined us to celebrate the day! 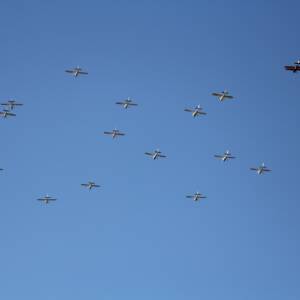